"Modern Piano Moving is dedicated to being the best. Beginning with your initial office contact, follow-up and scheduling; and continuing through the physical move at the origin and destination, we are committed to providing you the highest level of customer satisfaction and a sincere thanks."

Modern Piano was established as the first piano only moving company in St. Louis, Missouri. Built on a strong reputation for quality care and professional service, Modern Piano Moving prospered.

Russell started A-Alliance of Service Professionals. A not-for-profit organization designed to help single item shippers (pianos, antiques, art, one room of furniture) locate companies who could best handle their needs. While customers welcomed the new service, moving companies ignored the moves or failed to pay for them. To keep his customers happy, Russell started his own long distance moving company, Modern Moving Systems.

It was evident there was a need for a specialized, pianos-only nationwide mover. To test the water, Russell traveled to the area most likely to support an exclusive piano mover, the eastern coast Virginia to Maine. After only 30 days it was obvious the need was there. Modern Piano Moving became the first door-to-door nationwide piano mover.

Russell moved his headquarters to the virtual center of the country in Sullivan, Missouri. Just 2 miles from Interstate 44, Modern’s new 29 acre home was a breath of fresh air. Focused on quality, Modern’s first climate controlled warehouse was built. In addition to being fully insulated, plastic sheeting was included in all walls to prevent high summer humidity and a humidifier was added to twin furnaces to maintain a constant climate.

Modern added a full service shop with twin 80ft heated bays to maintain the truck fleet. While completing a move from Virginia to North Carolina, Russell met the sales manager of Volvo Trucks during the move of his wife’s piano. He was impressed with the care and concern shown. A week later he offered a show truck (used in the 1998 Super Bowl) to Russell for a two year test drive. Impressed with the quality, safety features, turning radius and driver comfort, Modern began upgrading its entire fleet to Volvo.

Modern Piano Moving added its first satellite location in Virginia: a 17-acre horse farm just 60 miles from Washington DC. Crews could live there at a reduced rate. This location has a converted dairy barn that could be used as a climate-controlled warehouse.

Modern Piano Moving added locations in Indiana (Chicago-land area) and Georgia (Atlanta/Chattanooga area). Again, climate controlled warehouses were added to the 15-44 acre locations. Now the pride of our company, the crewmembers could work and live within 550 miles of their home base on the east and 850 miles on the west. This made leaving their families easier because trips were shorter.

Modern Piano Moving added enhanced training, upgraded equipment, and focused on improving service. Jobs completed without claims were reduced to 2% (industry average is 20%). Climate controlled trailers were added to the fleet. All straight trucks received heaters. Satellite vehicle communication and tracking was added. Software driven GPS units were added to make it easier to find our customers. Our website was upgraded to meet the needs of the internet shopper. A two family modular home was built at Sullivan to allow drivers to live close.

Modern Piano added three new Volvo 780s to the fleet. Modern operated between 4-7 full-time professional crews throughout the United States. Modern began carrying shuttle vehicles on each tractor-trailer to allow for moves to be completed in areas where large trucks could not get close enough to the house. This was an instant success and surprised a lot clients who thought, "there is just no way." Modern completed more than 2500 long-distance piano moves.

Modern continued its success during the rough economic climate by offering timing and flexibility pricing options.   Modern expanded its area of coverage to include Canada, Hawaii and virtually anywhere in the world.

Modern Piano Moving welcomes the opportunities and challanges to better serve our valued customers. Our website has been updated in October 2009 featuring an affiliate  section that supports many of the key players in the piano industry. Customers can locate professional tuners, technicians, restorers, instructors and piano stores close to their hometown.

Modern Piano Moving expanded its warehouse at the Missouri location, adding an additonal 5000 square feet and a 24/7 video surveillance system. We performed an upgrade to a new state-of-the-art phone system. We also installed a brand new internal network and servers.

Modern Piano is currently overhauling our existing web site to meet the needs of growing technology, introducing a new online quoting system. We recently launched a mobile site that is iPhone and Android friendly. As we move forward, we will try to make it our goal to stay cutting edge and keep up with the trends of growing technology!

With 2015 on the horizon, Modern is preparing to upgrade its Volvo fleet. We have also shown a 14% growth by the end of 2014, setting record sales numbers. We hired more drivers and office personnel to handle the growing demand and are working diligently to have new software developed for an almost paperless system by the end of 2015!

2015 was another record setting year for number of pianos moved!  We added two new trucks (2015 and 2016 Volvos) to our fleet and have added new jobs within the company to meet the needs of our customers.

Modern Piano Moving now has additional storage capabilities with our expanded operations in Schuylkill Haven, PA and Daytona Beach, FL.  Our Order software has been updated to a more efficient and "green" system.   We also purchased another new tractor trailer, 3 new shuttle vehicles and a 2017 Ford Transit shuttle.  These essential purchases aid in the comfort to our moving crews and are reliable and safe for the precious cargo we haul!

The domain names modernpiano.com and pianomover.com are one and the same. 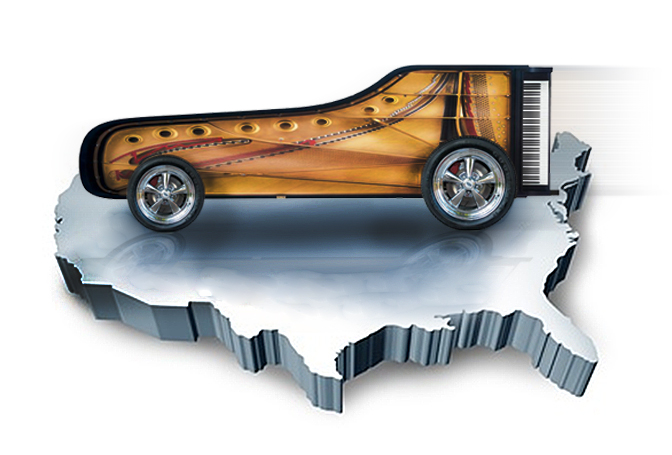